Start a Wiki
Patrice Garrouste (born 15 January 1967 in Toulouse) is a French truck driver. He originally made his debut in the race in 2016 in Trucks, before making the switch to UTV.

He finished 2nd in the UTV class in the 2018 Dakar Rally. He briefly led after two stage victories, but later lost that lead to Reinaldo Varela. During the rally, he celebrated his birthday, on the day that the ninth stage from Tupiza to Salta was supposed to run but was cancelled. In 2020, Garrouste switched back to the Truck category. 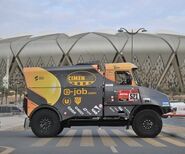 Patrice Garrouste's truck for Dakar 2020.
Add a photo to this gallery
Retrieved from "https://dakar.fandom.com/wiki/Patrice_Garrouste?oldid=5510"
Community content is available under CC-BY-SA unless otherwise noted.